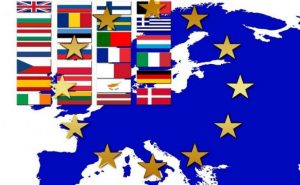 In a New Year’s Eve national address, the French president hailed the EU’s role during the Covid-19 crisis and announced an ambitious agenda for the bloc that could also serve his domestic campaign for re-election.
France takes over EU presidency, with Macron announcing an ambitious agenda while eyeing domestic re-election Emmanuel Macron has declared “the year 2022 must be a turning point for Europe” as France took over the rotating presidency of the European Union.
Source: the guardian