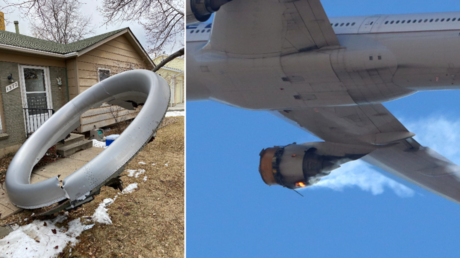 Engine failure of a United Airlines Boeing prompts airlines in US and Japan to ground dozens of 777s Boeing 777s have been grounded in the US and Japan after the US Federal Aviation Administration issued an emergency airworthiness directive following a catastrophic engine failure on one of the planes in Denver on Saturday.United Airlines said it was temporarily grounding all 24 of its Boeing 777s in active duty after one of its Boeing 777-200s had to make an emergency landing at the weekend, scattering engine debris across the ground.
Source: https://www.rt.com/usa/516246-faa-united-boeing-777-grounded/?utm_source=rss&utm_medium=rss&utm_campaign=RSS