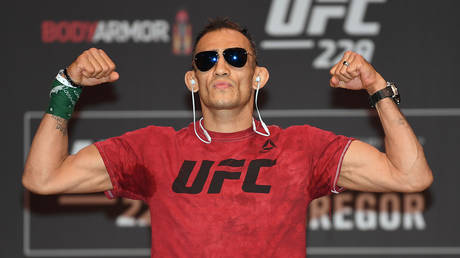 Defeated interim lightweight champion Tony Ferguson has made light of the pain he suffered at UFC 249, dancing with a hospital stand after his 12-match winning streak came to a punishing end with a surprise loss to Justin Gaethje.
Source: https://www.rt.com/sport/488521-ferguson-mcgregor-gaethje-twitter/?utm_source=rss&utm_medium=rss&utm_campaign=RSS

Tony Ferguson has called Conor McGregor a "chump" who "worked for me" as part of a bitter war of words, in which the Irishman labeled him a "f**king buffoon" who needs to "learn how to box" following his loss to Justin Gaethje. Read Full Article at RT.com
Source: https://www.rt.com/sport/488347-tony-ferguson-instagram-dance-justin-gaethje-ufc-249/?utm_source=rss&utm_medium=rss&utm_campaign=RSS